No, not Gangnam style: Kanban, an agile development method to have more control over the production process without overloading your team members. During a workshop ‘Mastership in Scrum’ at Prowareness we learned how to use the Pizza Game to get an introduction to Kanban and especially the WIP (Work In Progress) limit. In this blog I will explain how it works and what I have learned.

Begin with making groups of approximately five persons and provide each group with a pair of scissors, a pack of blank A4 paper, a red pencil and yellow and pink post-it’s. A slice of pizza is made of a half A4 cut diagonally with a fold on the wide side (pizza base), colored with red pencil (tomato sauce) and covered with three pink (ham) and yellow (cheese) small pieces of post-it’s. Each group makes one oven from a piece of A4 paper. The maximum baking capacity of the oven is three pieces at a time and it takes thirty seconds to bake the three slices. 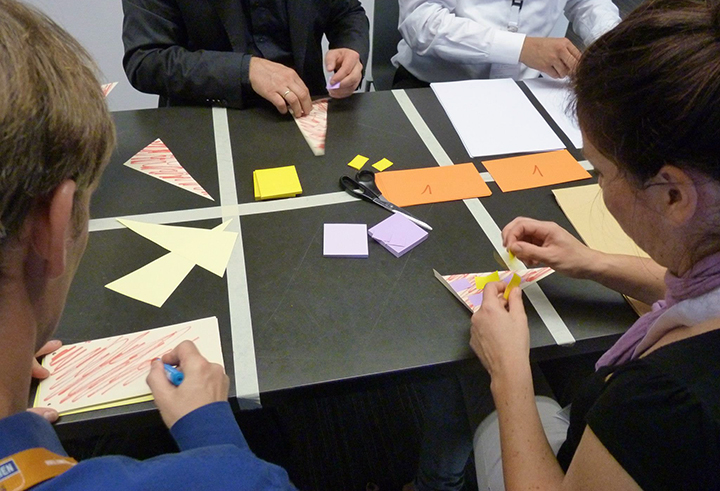 During these thirty seconds it is not possible to open the oven. After explaining the game, the groups get some minutes to discuss an approach for their production process. On your sign the groups start producing as many pizza’s as they can in about ten minutes. When the time has ran out, the production process is stopped and the productivity of each group is measured. For each baked slice of pizza a group gets ten points. However, what the groups did not know on forehand is that for each piece of unbaked pizza base four points will be subtracted, and for each piece of unbaked ham or cheese one point will be subtracted. This results in groups who have blindly produced a mass of ingredients ending up with a lousy score.

After this first round the groups get some time to evaluate and improve their production process. A second round of producing pizzas follows and after this round the final score will determine which group has produced pizzas most efficiently. Although it is nice to win the game, it is much more important that each group gets insight into the improvements made in their production process. After producing too many ingredients during the first round, they probably introduced some kind of limit to the number of ingredients being produced. In Kanban terms: they created a WIP limit to control their process and be more efficient. Workflow analysis

A workflow analysis of a pizza production process

Interestingly, the workshop’s final analysis revealed that each group had a different bottleneck in their production process. Where one group identified the oven’s limited production process as their bottleneck, another group produced ingredients too slowly because they became too careful after the first round. To me this is evidence of how dynamic and challenging life in a development team is. Depending on the team and the project you will always be facing different challenges for creating and maintaining an efficient development process. For some of them Kanban can be a solution and the Pizza Game is a great and fun way to get to know it.